DEPOSITION #2  SEPT. 17, 2010 RIVERSIDE, CA: The videos below record just a part of the almost five hour deposition of me by cult lawyer Kendrick Moxon in Riverside, CA.  He went to the court for a second "Motion to Compel" to force me to testify.  This time I was allowed to have my lawyer Graham Berry present.

Being in a deposition is like being in a trial as a witness, except that the interview is not done on the court's time, it is done beforehand.  I have other material I will release on this subject AFTER AnonOrange's trial is over.  I am being interrogated because I know a protester who is suing Scientology guards for beating him.  This is just about the only time you will see my face in a video.These videos below document how cult lawyer Kendrick Moxon uses and abuses the legal system to intimidate witnesses and protesters.

He is going on a fishing expedition looking for evidence that I broke the law, namely PENAL CODE SECTION 302-310.5:  Every person who intentionally disturbs or disquiets any assemblage of people met for religious worship at a tax-exempt place of worship, by profane discourse, rude or indecent behavior, or by any unnecessary noise, either within the place where the meeting is held, or so near it as to disturb the order and solemnity of the meeting, is guilty of a misdemeanor punishable by a fine not exceeding one thousand dollars ($1,000), or by imprisonment in a county jail for a period not exceeding one year, or by both that fine and imprisonment.

A million thanks to all my donors who not only paid the several hundred dollar fee but also took the time to transcribe the videos.   You donors are the best!

This tedious two minute deposition has only one fistfight and multiple discussions of porno/ejaculation/prostate issues. Yes its just another day for the Scientology legal department as their main lawyer, Kendrick Moxon, interrogates protester "Angry Gay Pope" in this "teaser video." 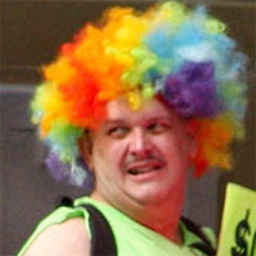 HAPPY SMURF'S COMMENTS: The start of the video (60 MINUTES) refers to a false declaration filed against the National Director of the Cult Awareness Network attesting to her having been a topless dancer. Rick Moxon is a psychotic liar. Actually, Moxon ordered his chief private investigator, Eugene Ingram, a former LAPD officer, to pay a female drug addict in﻿ Colorado $50 to sign a false declaration. Nothing has changed in Scientology in the last 20 years. Moxon continues to thrive as one of the cult's major scumbags.

DEPOSITION #1  MAY 29, 2010 RIVERSIDE, CA: These two unedited fifteen minute video files record my first deposition with cult lawyer Kendrick Moxon in Riverside, CA.  He found a way to prevent my regular lawyer, Graham Berry, from being present at the depo.  Protester AnonOrange was with me because it was his case which allowed the cult to depose me in the first place.  Things rapidly get out of hand as Moxon asks me many impertinent questions. Soon I walk out.

Unlike the videos above, which were edited for time constraints, this deposition occurs in real time with no edits.  I was not able to bring my lawyer Graham Berry with me.  After I walked out he later relented and my lawyer was allowed to attend the second deposition.

In the second deposition Moxon spent some time bringing up exactly the same issues as already covered in this video and would not relent.