MULTIPLE PROTESTERS THREATENED BY CULT GOON - LAPD DOES NOTHING!

HOLIDAY HANDLERS
The cult hired a huge goon to harass lone protesters and get them arrested. He was surrounded by Scientologists ready to say they saw anything and make a citizen's arrest. One protester, AnonOrange, got caught this way. A huge police presence whisked him off to jail. Too bad nobody came to press charges in the citizen's arrest. The guys was too busy being seen in my videos one hour later trying the same thing on me!  Other protesters were also threatened with arrest by Officer Griffith who confiscated the signs. At the station Orange was also not allowed to fill out a police report. I was quietly holding a sign in the crowd. No one was complaining (except the cultists trying to cover my sign). That's where this video begins. The 275 lb. goon lunges at me, I turn on the camera. He tries to punch my camera, makes two threats of bodily harm, violence was confirmed by a witness and Officer Griffith of the LAPD did NOTHING but threaten ME with arrest despite his being involved in both incidents. He refused to watch some of the very video you can see right now. 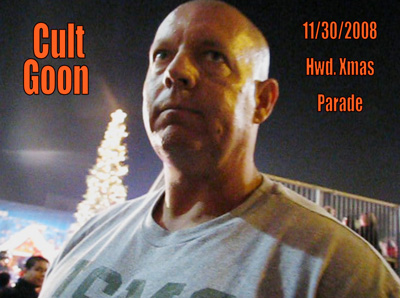 Nothing puts more more in the spirit of the holidays than to be lunged at by a thug and have the police treat me like I don't exist. The tinsel, the carols, the threats of arrest. Welcome to "L. Ron Hubbard's Winter Wonderland."  Can you unravel the mysterious mysteries and fantastic fantasies before the LAPD Internal Affairs Office does?