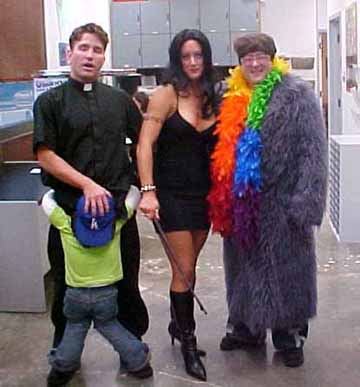 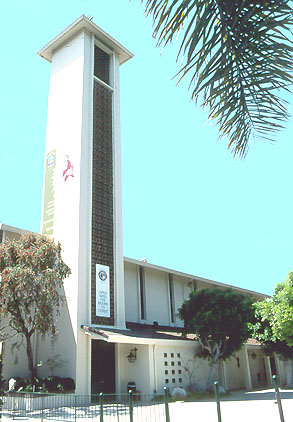 St. Victor's is a conservative Catholic church which preaches anti-Gay marriage dogma in the middle of West Hollywood, California.  Fruitopia! The church predates the city of West Hollywood which now surrounds it (although the original wooden structure was replaced in 1960 with the present, larger church.)

Msgr. John J. Devlin, the pastor of St. Victor's from 1929-1976, served as the head of the Legion of Decency, the organization that the was the precursor to the modern rating system. When public outcry over increasing sex and violence in the movies threatened to bring government censorship down on their heads, the motion picture industry turned to the Legion of Decency for an early, voluntary ratings system  Homosexuals you see entering this church may be very closeted and self loathing inside even when they are totally out!  Others come because it is Christmas and they are taking their parents. Some arrive for the music. Too bad.

They all get some Angry Gay Pope!  Especially abusive George and his homophobic friend Marjorie, Esquire.  Of course I shut up when it is show time. It's against the law in California to interrupt a religious service.

In other showbiz news, Ronald Reagan's father's funeral was held here and the private prep school next door boasts Monica Lewinsky as a graduate.  It was once a Catholic school but now St. Victor's leases it out.  It is hard to get parents to send their kids to Catholic school what with all the child rape. Unfortunately the Church does have a pre-school in the basement. SICK!

As I was born in a Catholic orphanage I have every right to criticize the group. In fact, I think and feel that I have the MOST right!  The Church lied to me about my own adoption, as I later discovered when I established comm lines with my biological mother over fifty years later. They also made her pay for my own birth even though they were making money on my adoption. 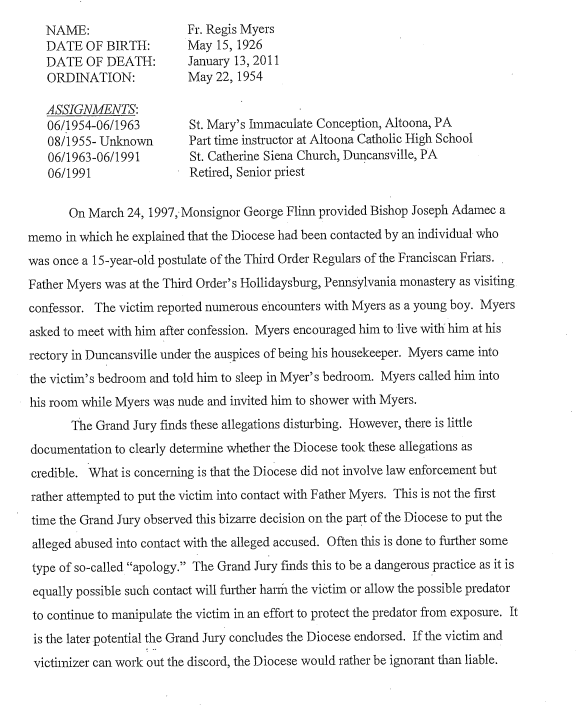 Now, in 2018, I discover that my probable distant relative on my adopted Dad's side Father Regis Myers of St. Catherine of Siena parish in Duncansville PA was an alleged pedophile.

In the 1980s I had to suffer through loads of boring sermons from this Catholic priest Father Myers who is probably a distant relative of my dad's. (I am adopted).  He would even have THIRD collections in order to pay for his endless interest in building physical things like a mausoleum on the church property.  Just like Scientology, he was more interested in buildings than in helping parishioners.

And now I see he is a suspected pedophile! SOURCE:  PA attorney general report LINK

It is a shame there is no proven thing as hell, as the little twerp would probably be there.

Here is a facebook page they are not hip enough to control: LINK