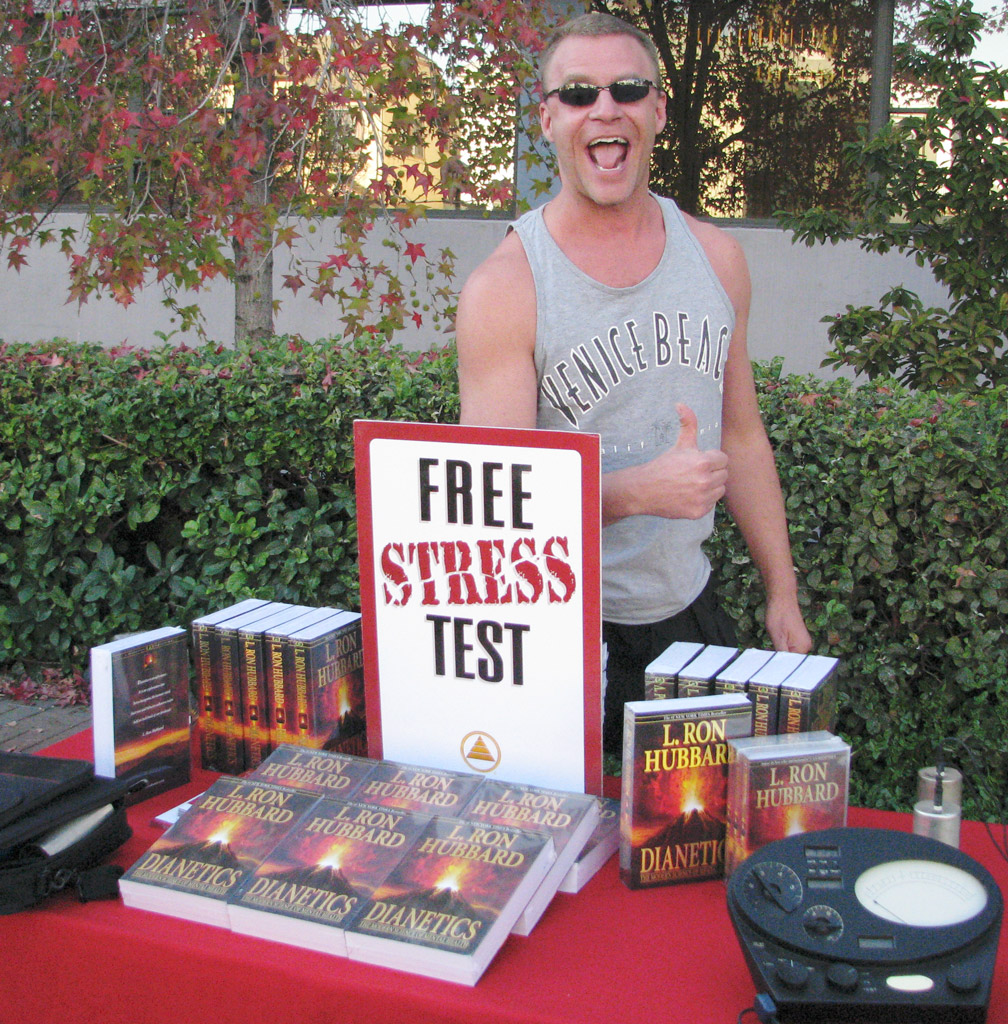 Stress test tables are set up to sell copies of Dianetics : The Modern Science of Mental Health (DMSMH) and get the name and contact information from the person buying the book. I qualify the title of the book because there are a number of books that L. Ron Hubbard wrote that start with "Dianetics" in the title. Examples are Dianetics 55, Dianetics : Science of Survival and Dianetics : The Original Thesis.

I do not know whether a person is counted as a scientologist if they only buy a book and give their contact information but for sure within twenty-four hours of them buying a book and giving their contact information there will be a manila folder with their name on it and a copy of their sales receipt in it in the org that sold them a book. From then on they will receive mailings from scientology. Do the book sellers disclose that information? They will if asked, but they will down play it.

The red table cloths and tee shirts that the stress test book sellers were wearing are part of the stress test action that was originally done in New York. There was an extensive piece done on the New York Stress Test Tables in an event for which there is a DVD. I am not absolutely sure but I think it is on the same set of DVDs that went with the IAS event in which Tom Cruise went "Woosh!" while wearing a black turtleneck. If you can get a hold of that DVD you will see David Miscavige wearing one of the special Dianetics jackets. (As if he ever sold a copy of DMSMH to a public person.) 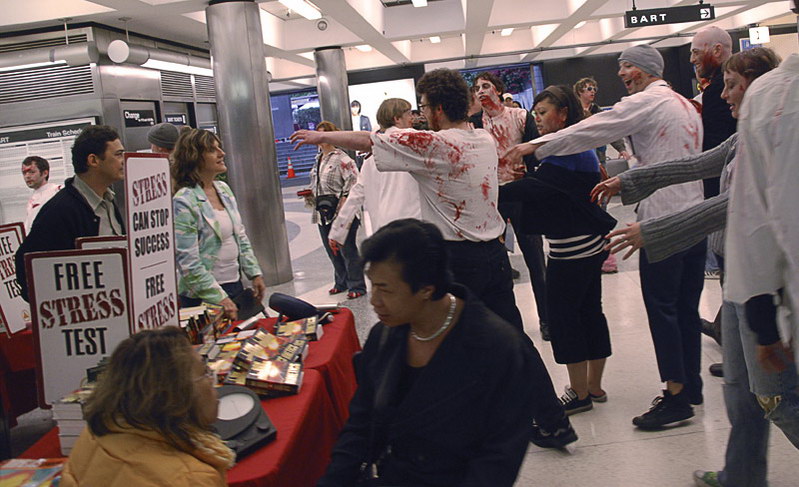 Most likely in Angry Gay Pope's video the people manning the tables are most likely not scientology staff members but public people at the local org. That's probably one reason why they look so good. The older woman who did not look so good probably is a staff member. Take another look at her and see if she doesn't look sleep deprived to you. The stress test tables being out at night indicate that they are part of the "foundation org" for whatever scientology building from which they came.

This is how the tables are organized. Each table has two testers, one at either end with an e-meter. There is a third person at each table who oversees the table, does the barking to get people to take a test, restocks the books and essentially runs the table. With more than one table there will be another person present as an "in charge" (I/C). I thought the older woman involved held that position but it may have been the person making the call on the cell phone. The other possibility is that there were two people overseeing all the tables. 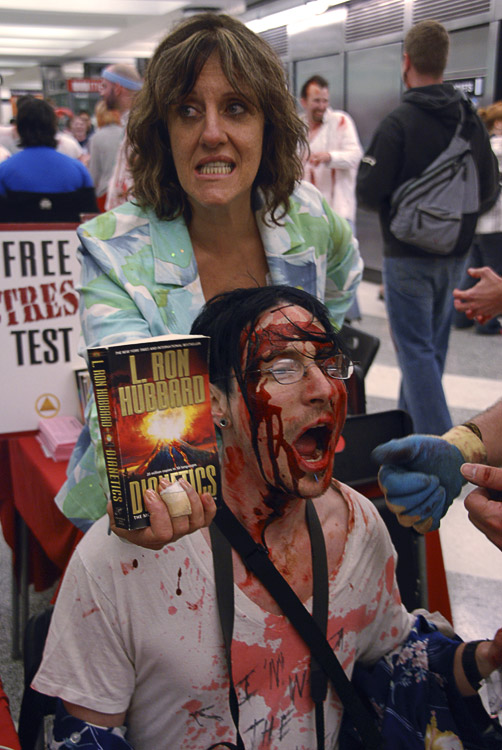 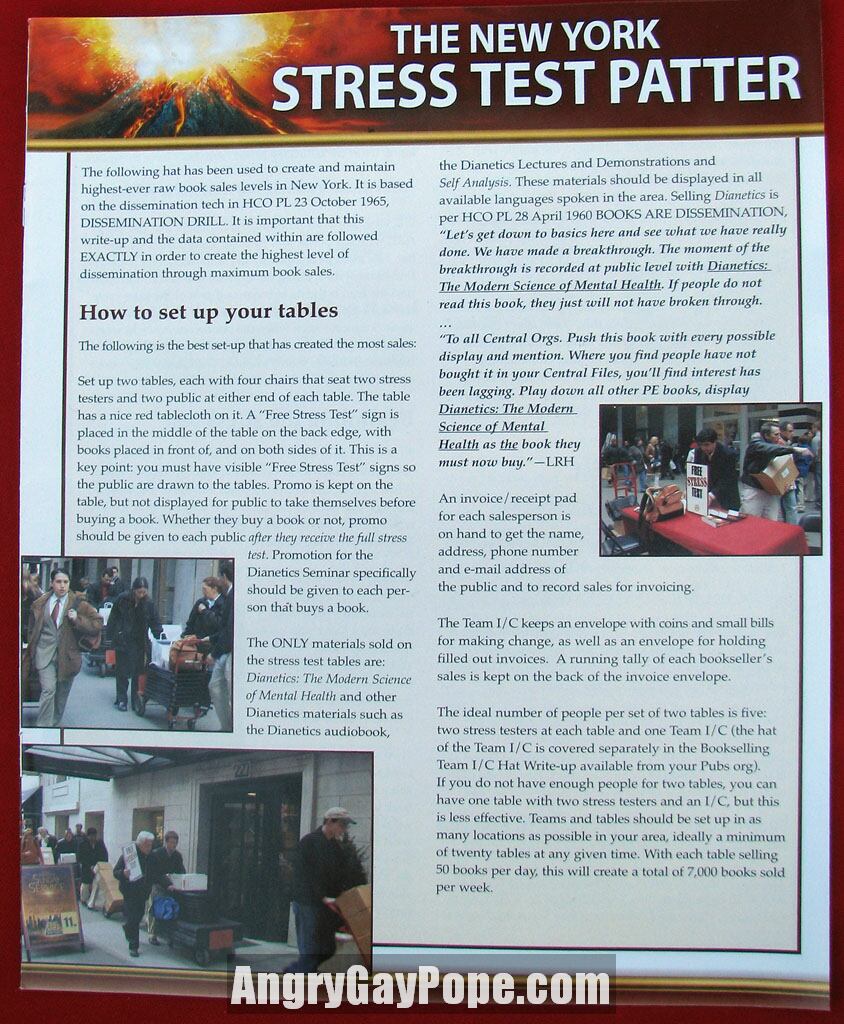 The video gives the time as 11:45 p.m. Most orgs close at 9 p.m. or 10 p.m. Even though Angry Gay Pope got them to take their stuff down they likely were there for three or four hours prior to that and from their attitude they probably sold quite a few books. The public people involved would most likely have arrived at the org around 5 or 6 p.m., had a briefing on what they would be doing and had quotas given to them for the night. Again judging from the celebratory meeting between two of them on the video this group either made their quotas or were coming very close to doing so when Angry Gay Pope found them.

Will they be out again? Probably. This is looked on as a "successful action" and David Miscavige, I believe, receives L. Ron Hubbard's royalties from book sales. Whether that's the case or not he is very much behind this activity, although not necessarily directly. The odds are that when they go out again they will have been briefed on Angry Gay Pope or they will go with one or two office of special affairs (OSA) members.

Angry Gay Pope, I know you like to wade in and that's good, but if you should happen on this activity again, could you possibly spend a little more time doing reconnaissance before busting it up? Another possible enturbulating activity that could be engaged in would be to hand out a small flier about one or two blocks away from the tables. The flier should briefly tell people what happens when scientology gets their contact information. That will dry up the book sales and significantly raise the stress level of the stress testers, especially those who are staff members. It would be interesting to see how long such fliers can be handed out before the stress testers find out about it.